Mridangam is an ancient instrument, a primary rhythmic accompaniment in Carnatic Music. It is popular all over the world for its melodious sound and rhythmic pattern. Ken Art Mridangam thrills the hearts of hundreds of young people, inspiring them and making their dreams come true. KENSRI believes in the implementation of Traditional Style of teaching.

Learning Mridangam art has no barriers of language. The training ensures all the students to develop their skill. On completion of the training, the successful students are well prepared for their “ARANGETRAM”.

ARANGETRAM:-  Arangetram is a debut musical performance which takes place normally in presence of GURU, Great Vidwans, Critics, Organizers, family members and so on. The student is eligible for this, only after attaining the performing level with substantial, qualitative high standard in the field of music. The performer should be able to perform at least for 30 minutes. Create a list of Taalas they perform, Thorough training with vocal music. 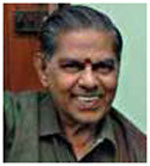 T.A.S. MANI a well known International Mridangist of our country was our Percussion ADVISOR. He was the first person to start Karnataka College of Percussion in 1964. He has accompanied with all stalwarts of our country and has had an experience of 60 years as a Performer and Teacher. To his credit he has several awards. To name a few Sir Henry Wilson Award ,Gana Kala Bhushana, Karnataka Kalashree , Life Time Achievement award Madras Music Academy. He has also travelled all over world several times.